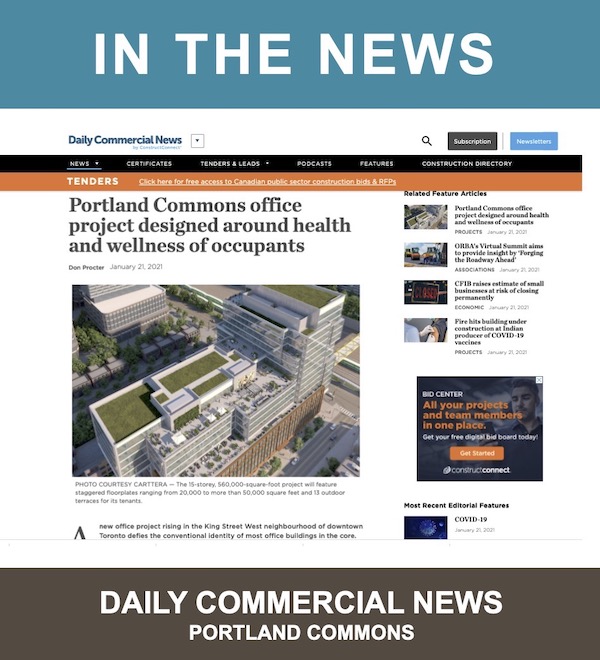 Anew office project rising in the King Street West neighbourhood of downtown Toronto defies the conventional identity of most office buildings in the core.

“We’re not trying to build the tallest, shiniest attractive tower. This building is designed around the health and wellness of the occupants of the building,” says Dean Cutting, partner at Carttera Management Inc., the Portland Commons developer.

The 15-storey, 560,000-square-foot project will feature staggered floorplates ranging from 20,000 to more than 50,000 square feet and 13 outdoor terraces for its tenants.

“It is a design that is intended to feel like it belongs in the neighbourhood,” says John Gillanders, principal of Sweeny&Co Architects, the project’s architect.

He points out that one of a number of challenges or “design opportunities” has concerned interior space logistics on the north end of the building where floors are cantilevered or straddled over the roof of a heritage building.

As the architectural firm was working through design, the pandemic struck. Rather than take a pause to rethink the development, Carttera retained ARUP of New York City to “advance” some of features of the building, explains Cutting.

Cutting points out that the most expensive upgrade is a building information system customized to tenant needs. It will provide occupants with a range of data and information about their floor such as the number of employees in the space at a given time and the quality of the air.

As a result of the pandemic, the building will also have numerous touchless access entries along with washrooms with touchless fixtures, he says.

“They (ARUP and other consultants) wanted to make this building pandemic ready,” Tibben adds.

Emphasis on indoor air quality too was a priority from the design outset, the architect adds. Raised flooring with underfloor air supply to mitigate the spread of potential viruses and operable windows throughout the building are examples.

“There are a number of things we designed (pre-pandemic) that have some benefit for the concerns that people have now about COVID and being in proximity to lots of people in congested spaces.”

Carttera anticipates that most tenant employees will be within walking or biking distance (360 bike stalls will be included) of the building because it is in a high-density residential neighbourhood.

While there are risks to developing premium office space on spec in the midst of a pandemic, the developer is confident the innovative building is the right move.

“Everybody in Toronto, if not the world, is re-examining their office requirements,” Cutting says, noting that people will be less reluctant to come back to offices after the pandemic if their workplace incorporates features that prevent or minimize bacterial or pathogen spread.

Other reasons Cutting isn’t hesitant about the project’s success is its prime location and the “historically low” office vacancy rate in the core.

The building is targeting LEED Platinum for its core and shell and is also going after a wire-score Platinum certification.

It will be connected to the Enwave Deep Lake Water Cooling network via The Well, a seven-building mixed-use complex now under construction a block east of the Portland Commons site.

Mike Yorke, president of the Carpenters’ District Council of Ontario, says the project sets the bar high in office building innovation because of its flexible design and features that take into account the pandemic.

“It’s a great example of confidence in the long-term health of the Toronto commercial real estate market,” Yorke adds.

The project, which started last September, is scheduled for completion in the fall of 2023. Construction is by EllisDon Corporation.